The Training And Examination Curriculum

Although Jujutsu, this ancient martial art, has been passed on to us through the direct teaching method, from master to student, the nowadays reality require an open attitude towards modern methods of structuring information and planning the learning and verification process.

In light of this, we have put together the training and examination curriculum, with the desire to have an effective tool for initiating and perfecting Jujutsu students.

We would prove to be narrow-minded or to have a manner of practicing too closed in old ways that required the secrecy of their own techniques or the rejection of the teachings of another school to isolate their followers from outside influences, if we wouldn’t augment the original Jujutsu curriculum with techniques that have proven effective over time.

Thus, we have completed the curriculum with Karate striking and blocking techniques, with Judo throwing techniques or ground fighting techniques from Brazilian Jiu Jitsu, granting them their place as part of any martial arts with efficacy claims.

The training and examination of students is structured on several main directions. Successively are enumerated techniques from different categories: stances and movements, punching and striking, kicking, blocking, breakfalls, throws, groundwork, standing defences, all patrimony of techniques of Rekigan Jujutsu.

Besides these are assessed the physical training, kata, the ability to fight and basic knowledge for the use of simple weapons such as short cane, long cane, tonfa and nunchaku. Some of these begin to be studied only after getting the black belt.

Perhaps the theoretical chapter Riron will surprise you. We are thus trying to provide a solid base of knowledge about Jujutsu and martial arts in general. This is necessary because, from the point of view of traditional martial arts, each student is a future instructor, and instructors must have complete training, including a solid specialized knowledge.

An entire comprehensive training direction, elaborately structured, is dedicated to standing defences techniques Tachi Ukete. In this section Ideal Forms and Particular Cases will be taught and later examined.

What are the Ideal Forms?

A wide range of techniques, from which we will give some examples: Kote Gaeshi, Seoi Nage, Shiho Nage. The names of these techniques have been set using Japanese terminology available from various sources. These are techniques that can be applied against a very wide range of attacks. We cannot say that they can apply to any type of attack, but they can generally be used against an impressive number of possible attacks. This type of techniques, with a wide applicability, has been called Ideal Forms.

What are the Particular Cases?

Starting with Kyu 4 (orange belt), the first test to get a new rank is “checking the knowledge for the rank already obtained“. At the first requirement of this test “mistakes in the previous examination“, the candidates must again, without any mistakes, present techniques that they didn’t perform satisfactorily in the examination for the previous rank. The next requirement, “random techniques“, requires the student to execute without error randomly chosen techniques by the examiner from those performed for the last rank obtained. The third stage of this test varies depending on the rank, basically being tests that highlight the candidate’s pedagogical qualities and knowledge of organizing and conducting training.

We noticed the students who passed the examination for a rank and sometimes they start focusing on the new exam, neglecting the techniques learned before. Being at the beginning of their training, the knowledge is not well fixed. The Shodan exam (black belt 1st Dan), which is mostly a complete recapitulation of the assimilated knowledge of coloured belts, revealed students who had problems with some of the techniques they had successfully presented in previous exams. This is why we introduced these checks at each rank to ensure that mistakes are corrected and to maintain constant interest for all the techniques in the curriculum, whether they have already been presented in an exam or not.

In their original forms the martial arts did not have ranks or coloured belts. Awarding coloured belts (ranks) to indicate the level of training appeared with Judo. In other martial arts no ranks were given until the 1960’s. The first Kyu’s structure provided only two colours for them. For 6-4 Kyu ranks, white colour, and for 3-1 Kyu, brown colour. 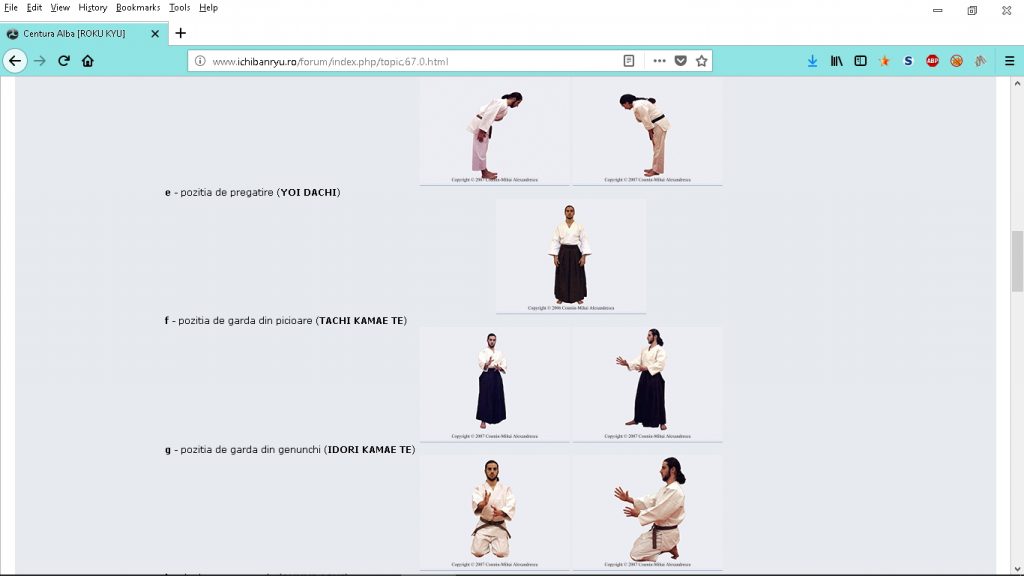 The choice of different colours for each belt belongs to master Jigoro Kano, the founder of Judo, who has done nothing but take over some aspects of the Japanese social life of his time. Japanese society and culture were very much imprinted by the idea of belonging to different classes or castes, by the idea of social hierarchy, so choosing a belt as a symbol was very natural.

Every style and martial art has its own ranks, but there is a similar structure. For Jujutsu, Aikido, Judo and Karate, the first ranks group is called Mudansha (without Dan), the black belts from 1st Dan to 4th Dan are called Yudansha and finally from 5th Dan upwards it is called Kodansha.

Returning to the curriculum structure, for a good systematization of the techniques, they have been organized in five ranks (Kyu – coloured belts) which allow their gradual learning. There is also Kyu 6 (white belt), but in most cases this is the rank that is given from the start to any new student. In this curriculum there are acquirements to be examined including on level Kyu 6, yet these are few and simple, being just a test that marks the beginning of the training in martial arts.

Rigid intervals of training between ranks have not been set. Everybody learns at their own pace, but in practice it turned out that between 3 and 6 months were generally sufficient to assimilate the knowledge needed to get a coloured belt. Students are permanently stimulated to prepare, passing an exam being a clear proof of the advance achieved in training.

The curriculum for each rank is systematized as a set of tests, becoming visible the structure of the progress on the basis of the “step by step” principle. Techniques are organized “from simple to complex”, but also based on their resemblance. Just like building a house, martial arts need a solid foundation first. It would be improper to teach complex defence techniques to a student who does not yet master the basic technical elements.

Resembling techniques have been grouped together. For example, Ude Osae and Ude Nobashi techniques are similar. In the first variants of the curriculum they were assigned to different ranks which led to confusion. Being similar did not always distinguish them, it was required to show one of them but the other was demonstrated instead. The solution was their positioning in the curriculum for the same rank, which led to a clear learning of the differences between them, the student performing them in the same exam.

Commonly, between 3 and 5 years of constant training allow reaching the level required to get the black belt 1st Dan. This is the moment when the students know and master the basic techniques.

Further, in the curriculum for Dan ranks they will learn techniques for which a high level of precision is required. Because from this level the basic techniques are well known, the teaching of counter-techniques and subtle variants of basic techniques begins. The students who reached this level will think by themselves technical combinations and the pedagogical tests will be complex.

You can see the recording of an exam for the Shodan rank (black belt 1st Dan), courtesy of sensei Bugalete. The exam progressed over the duration of 7 training sessions (13-27 April 2007), lasting more than 10 hours of filming.

The video material was edited to keep the relevant parts for the techniques in the curriculum. The parts less useful for the present situation have been eliminated, such as the writing for the theoretical subjects or the didactical test, so that the duration of the video material was reduced as much as possible.

Please bear in mind that this recording has not been made with the view of it being published later, it was made for personal archive only. The quality and the angle of filming leave something to be desired, but it can be a good illustration of the progress of an exam.